Author of Around the World at Nineteen: Explorations and Romances (Moved by Curiosity Memoir #1)

How would you describe "Around the World at 19" to a new reader?

Where did you go?

What gave you the idea to write about these long-ago events?

Are these locations significant for you?

How important was it to you to write with pace and energy?

Is the book humorous?

How have readers responded to Around the World at Nineteen? 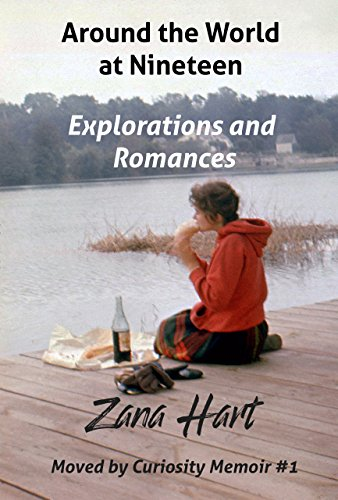 Nineteen-year-old Lesley Linebarger would start conversations with anyone anywhere. When she was told "Life won't be what you expect," she took the warning to heart. But by going to France as a college sophomore in 1961, she did expect to improve her French. That happened less than she hoped, as proved by the Parisian taxi driver who drove off in a huff when her pronunciation didn't meet his standards.

When tragedy struck fellow Stanford students, she questioned her beliefs. When she traveled alone around Europe, she, confronted Italian men who pinched her and she met her own darkest fears. All year, her curiosity and her anxieties were in conflict with each other. It didn't help that she often experienced fatigue.

Lesley didn't expect to go around the world. She didn't foresee having no choice one night but to stay in a hotel of ill repute, or the all-too-public attack of traveler's diarrhea with people laughing at her, or getting stuck in the mud in a Viet Cong-held village in Vietnam.

She hoped for romance but she loved her solitary rambles in Paris so much that she didn't care about not having a boyfriend for months on end. When she fell deeply in love, and spent a night with the man, it was bittersweet.

She was already an obsessive journal writer but she also discovered a passion for photography, illustrated by the photos in this book. In the end, it was a good year.