Haydn Wilks is a Welsh author whose first two books took a gritty and often darkly humorous look at life in Cardiff. His latest novel $hitcoin takes on the world with a wild tale of excess, betrayal, sex, drugs, and death that plays out across five continents. It follows a group of students in the Netherlands who launch a cryptocurrency and generate millions from international investors. Large portions of the novel take place in China, South Korea, Japan, and the United States. We spoke with Wilks about the insane real life stories which inspired his new novel.

Your new novel $hitcoin is based on the real phenomena of alternative cryptocurrencies which generated insane amounts of money in the hype surrounding Bitcoin back in 2017. How closely does the book mirror reality?

The novel has a global focus with storylines taking place in many different countries. This is a big change from your first two novels, both of which were set in Cardiff. What was your thinking behind trying to write something so global?

Did you buy into the hype surrounding cryptocurrency?

Did you make much money?

What do you think was behind the insane hype surrounding cryptocurrencies in 2017?

Which other books did you draw on in writing $hitcoin?

It's just been announced that a movie is being made based on another cryptocurrency book, Bitcoin Billionaires. Do you expect to see more movies on this topic?

If $hitcoin was made into a movie, who would you have in mind to play each part?

There are a lot of characters in the novel. Some are sympathetic, others are very much not. Which characters were your favorite to write?

You said that there are a lot of stories to be told about cryptocurrency. Do you have any plans for another crypto-focused novel after $hitcoin? 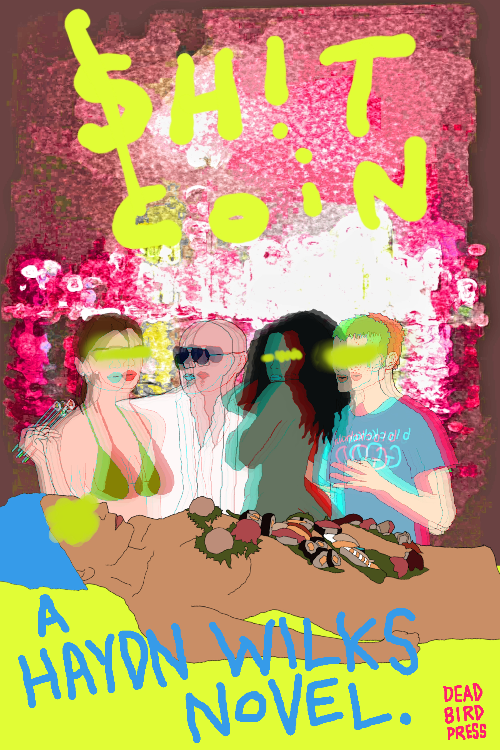 Bears & Bulls make money. Pigs get slaughtered.
Three Dutch university students watch rap videos and dream of big yachts & banquets of sushi served on the naked bodies of supermodels. Could making millions of dollars be as easy as writing a few lines of computer code? How easily could they launch their own cryptocurrency?

Alicia came to China from Malaysia to make her fortune. Now she’s trapped between working at a clothes factory and a seedy karaoke bar. One of the bar’s clients got rich mining bitcoin. Can she escape after emptying his wallet?

Graham doesn’t know what cryptocurrency is but he knows it’s making people rich. That’s why the London hipster magazine he writes for sends him to Berlin to cover the crypto scene. Could it be an escape from a job he’s rapidly becoming too old for?

It’s Wolf of Wall Street for the Instagram generation.

London, New York, Tokyo, Seoul, Dubai, Rwanda, Moscow, El Salvador, Chengdu, Hong Kong, Groningen, California. This is a modern tale without borders or morals. With billions of dollars to play for, who will survive the SHITCOIN’s rise?