How would you describe NASTY BUSINESS to a new reader?

What was the inspiration behind <NASTY BUSINESS> ?

Which character in NASTY BUSINESS has had the greatest impact on readers?

If NASTY BUSINESS were to be adapted for TV or film, who would you see in the lead role? Who did you have in your mind’s eye when you wrote him/her?

How have readers responded to NASTY BUSINESS 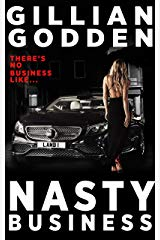 Tony Lambrianu is bold, daring and ruthless, qualities that have propelled him and Jake Sinclair up the ladder in London’s sleazy but lucrative underworld.

And, now that he’s running a fancy West End nightclub, Tony has new-found celebrity status – with a never-ending string of gorgeous women on his arm, he’s become the darling of the tabloids. However, despite his success, he still feels he lacks the respect he deserves and the status he desires. The little boy who lived on the streets is never far away.

Desperate for recognition, he’s driven to achieve more and more. Most of all, he craves the acceptance of Ralph Gold and to become a bigger part of his extensive web of organised crime.

Fearlessly facing up to enemies, winning battles and becoming the undisputed bosses of the London underworld can be a nasty business, but it’s the only business Tony and Jake know. And they’ll stop at nothing to succeed.