Author of Reunion, Book 2 of the E.L.F. Saga


I am two years older than dirt. American born and raised, lived on both coasts and various places in the middle of America. My dream has always been to have superpowers, which never materialized so I fell back on my love for writing.
The first manuscript was written in pencil when I was about 17, maybe earlier. Many, many years later I used a typewriter to write the second manuscript which I hope to have published next year (30 years after it was first written)
Finally, I wrote the first three books in the E.L.F. Saga and published them this year.
Almost forgot the important part. My wife and I (been together for 50 years) travel the country (the rumor that she is part gypsy ... isn't true). allowing me to write in some nice places.
I hope you enjoy the stories I create and remember all my books are also on Amazon Kindle.

How would you describe Reunion to a new reader?

What was the worst review you ever received on anything you've written as well as your reaction?

Why do you write?

What is your inspiration that allows you to create locations that take place on distant planets.

When/if your name is mentioned at a writers group, what do you hope they will say about you.

What social causes would you get involved in if you became famous?

Your books have a lot of characters in them, mostly from other worlds. How do you come up with so many odd names?

It has been said that writers live a lonely life, has that been the case for you?

What is your greatest fear? 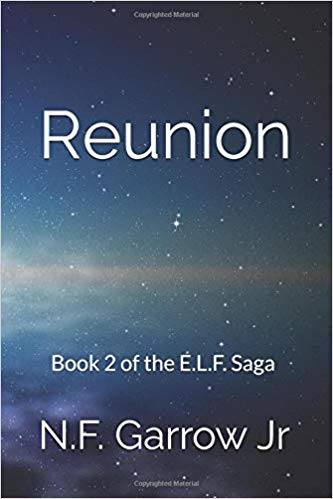 An experiment gone wrong? Perhaps, but for whom!
Doctor Aldrich Huysman has little regard for the primitive beings of Earth, to him his lab rats have greater worth. Yet his experiment unleashed upon Earth is dragging others into a collision course that could tear the fabric of his life's ambition, to rule The Dynasty of Man.
Jon Vega and his crew are returning from their recovery mission on Earth, with unforeseen results. For Vega, his complicated choices have sealed his death, yet he continues to fight for a simpler life.
Major Tobias Potts the leader of ES Striker must balance his commitment to the Dynasty of Man and his love for the mysterious woman Elan. Either one of his choices will lead him on a path of destruction, but does he really have a choice?
A pawn in a power struggle he could never have imagined or wanted, the Earthling Dan curses his fate, while the same time fights to control it.
The desire of a few, create a ripple in the Dynasty of Man which continues to fan out beyond its borders, igniting a fuse that can only end in destruction.
Reunion is the second book of the E.L.F. series that immerses you in the struggle between power, desire, and hate that reaches well beyond this world.