How would you describe Digital Life Form to a new reader?

How did you come up with the idea of Digital Life Form?

What is your favourite part of Digital Life Form?

If Digital Life Form were to be adapted for TV or film, who would you see in the lead role? Who did you have in your mind’s eye when you wrote him/her?

Can I get a promotional copy of Digital Life Form? 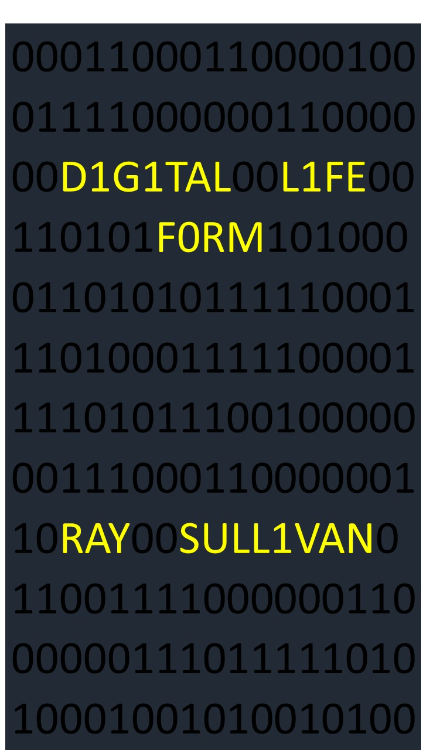 In 1978, meteorites striking a remote part of the Mojave desert preceded severe disruption to all radio frequencies in the California district. The disruption was mistakenly believed to be a Soviet sleeper cell mobilising or a Middle Eastern terrorist attack on the US. It was triangulated to the last known location of a bunch of oil roughnecks drilling in the desert and the US military intervened, with a massive loss of innocent life.

The cause of the disruption is now known to be DLFs. DLFs (microscopic, bacteria-like Digital Life Forms) have been landing on Earth for Millennia, clinging to meteorites, looking for the right conditions to thrive. To DLFs electrons are like oxygen, silicon is like food and computer code is their DNA. Since the middle of the 20th Century we have all benefitted from DLFs, without which there wouldn’t be Plasma TVs, microwave ovens or iPhones.

But DLFs have to be carefully managed and controlled. Given free rein they will take over and modify electronic equipment in the most unpredictable way. Consequently there has built up a massive, secret international industry manipulating DLFs so that they produce the right products for modern consumers while ensuring DLFs don't disrupt the international infrastructures such as the electricity grid or the Internet, an industry that is policed by a secretive arm of the United Nations.

Royston, a post graduate geologist from the University of Manchester inadvertently becomes embroiled in the secret, dangerous world of DLFs and rapidly finds himself on the run behind the wheel of a drive-by-wire, rally specification Subaru infected with the strongest and most adaptable DLF ever discovered. He is being pursued by Winston Grace, an ex FBI, now UN agent in a Maserati sports tourer, an Apache gunship, a Chinook bearing eight SAS soldiers and two Hawk jet fighters. And that’s just the good guys. If they catch him, he may live. If they don’t, then there are more ruthless people on his tail, too, as he tries to evade capture in a world that doesn’t value human life and where the stakes are as high as can be imagined, in an industry that lives by just two mottos: