Author of The Herring Barrel


The author’s career begun at sea as a boy in the Royal Navy, service in the Far East and around the oceans of the world, continued in the offshore oil industry throughout North Sea Forties Field construction, extended into procedure writing within the oil industry that included years in Saudi Arabia, also work for the Atomic Weapons Authority. His skills gained in revising an industry’s approach to technical publications is clearly reflected in the author’s recent fictional work, a far-reaching salt water-stained account of conspiracy and political intrigue set in 1969.

Who are you, in terms of your author persona?

How long have you been writing and in what form?

What should a reader of The Herring Barrel expect?

What really inspired you to write your book. Who, if anyone, has influenced your writing style?

In spite of many early rejections, as you say on the dedication page of The Herring Barrel, you continued with it. Why?

What is The Herring Barrel about and whom do you believe is your targeted reader?

Are the locations and characters in the book real or imagined?

Is marketing a problem for you?

What advice or words of wisdom do you have for fellow writers?

What trends in the book world do you see and where do you think the book publishing industry is heading? 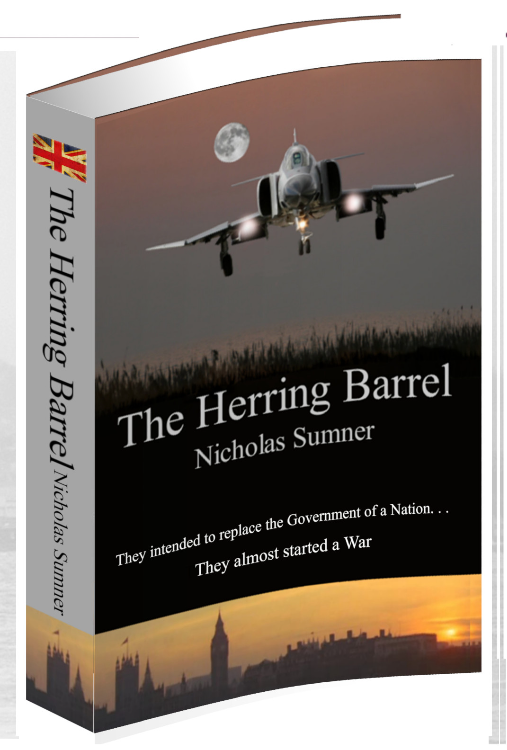 In the week before Christmas 1969, the aircraft carrier left Devonport for her pre-terminal inspection trials after a long refit, a few days expected at sea, no indication of the trouble to come in the days ahead. The murder of close friends, the unknown whereabouts of a prominent British scientist, an air accident and unexpected political intrigue lead to a search for the dangerous truth behind a colleague's disappearance.

Against the background of a failing aviation industry, a successful government project likely to be cancelled for no reason other than political austerity it seems, two leading scientists are drawn into the disappearance of their stubborn head of project. Various unexpected interests, from a senior government civil servant to a shady individual known to be in a department of military intelligence, appear to have agendas of their own, as a result the plot thickens with tragic consequences. Threatened with detention, the protagonists are given no option but to flee their country, expected to find answers to what appear impossible questions. The trail leads them across France to the wild wastes of the winter Camargue, where they discover dramatic evidence of an incredible event which they feared had occurred, now certain they stand alone with their country against them.

There is an interwoven story following through the events narrated, the missing prominent scientist’s journal written during World War II and beyond, his experience of the war in Poland, further mystery uncovered that his colleagues find difficult to reconcile.

The trail appears to end at Marseille, where the scientists’ search for their colleague takes on unexpected assistance, resulting in a sea chase in pursuit of a tired East German freighter, Soviet intervention on the horizon fired up by fictitious reports in the UK press, that reaches a climax in a vicious Mediterranean gale on Christmas Day. The protagonists suffering personal tragedy once again, witnesses to unfolding drama with unimaginable consequences, their early conclusions challenged, the way forward no longer in their hands. It becomes evident somewhere ahead they have a part to play in a dangerously intense international situation with the future stability of their country at risk. Not without further tragedy, events move toward an extraordinary finale on New Year’s Eve, 1969.