What was the inspiration behind Donn, TX 1969 ?

Which character in Donn, 1969 has had the greatest impact on readers?

If Donn, TX were to be adapted for TV or film, who would you see in the lead role? Who did you have in your mind’s eye when you wrote him/her?

How have readers responded to Donn, TX 1969? 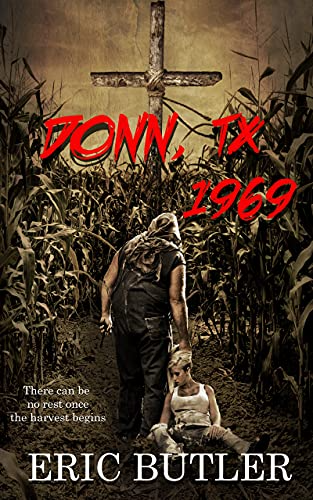 Posted In: Horror
Buy this book

There’s a place in Texas the locals avoid at all cost, where the lost go missing and the damned reside.
You won’t find it on any map, there are no road signs to guide you, and once there, may God have mercy on your soul.
For when the scarecrow awakens, the harvest of the living begins.

1969
Frank is back from Vietnam but struggling to reconnect with the world he once knew. Jane is convinced a road trip to Houston will help them both find the connection they are missing. First, they need to drop off her younger sister and her best friend at the university, and then the honeymoon the war put on hold can finally begin.

Except now they are lost on the back roads, and each mile brings them closer to Donn. If only they hadn’t exited the highway …

But now it’s too late; for the harvest is nearing its end, and the scarecrow requires its due.