How would you describe Dangerous Games to a new reader?

What was the inspiration behind DANGEROUS GAMES ?

Which character in DANGEROUS GAMEShas had the greatest impact on readers?

If DANGEROUS GAMES were to be adapted for TV or film, who would you see in the lead role? Who did you have in your mind’s eye when you wrote him/her?

How have readers responded to DANGEROUS GAMES 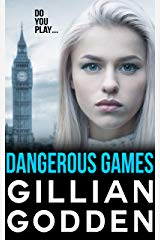 Annette Lambrianu is young, blonde, beautiful and bored. Life on the family vineyard with her husband and young son, Antonias, is not what she had expected. Yearning for excitement, she flees to London with her lover and the boy, only to find out the streets are not paved with gold.

Since being taken from his home by his mother in the middle of the night, fighting for survival is all Antonias Lambrianu has ever known. He soon learns that money is power and sets his sights on what he sees as a better future. When his past finally catches up with him, it unexpectedly opens up new opportunities, but new threats come hand-in-hand with them.

Antonias is determined that he will emerge triumphant, but there’s jeopardy everywhere and the stakes are high. Everyone, it seems, is playing dangerous games … Antonias most of all.

This is a tale of selfishness, cruelty, love and betrayal. But who will be the ultimate winner?