How would you describe FRANCESCA to a new reader?

What was the inspiration behind FRANCESCA

Which character in FRANCESCA has had the greatest impact on readers?

If FRANCESCA were to be adapted for TV or film, who would you see in the lead role? Who did you have in your mind’s eye when you wrote him/her?

How have readers responded to FRANCESCA 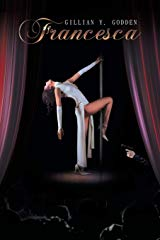 Sizzling gangland tale of grittiness and romance. Single mother Francesca is struggling to get by when an act of desperation leads to her owing a debt to notorious gangland boss, Tony Lambrianu.

Tony has his own troubles – a change of image from playboy to respectable married man is needed to further his criminal career. He has women falling at his feet, but none he wants to make his wife.

As Francesca is drawn deeper into the dark underworld dealings of Tony and his associates, she has to make alliances of her own to survive. And she’ll do whatever it takes to protect her small son.

This is a roller coaster ride of high stakes, dirty tricks, loyalty and love. Strap in – it’s a hell of a trip!