Kathryn Zurmehly is a U.S. Army veteran and calls Phoenix, Arizona her hometown. She grew up with a love for stories, heroes, and new worlds. She enjoys Krav Maga, good whiskey, at least reasonably alright wine, petting dogs, and time with family.

How would you describe Doomwalker to a new reader?

What was the inspiration behind Doomwalker?

Which character in Doomwalker has had the greatest impact on readers?

If Doomwalker were to be adapted for TV or film, who would you see in the lead role? Who did you have in your mind’s eye when you wrote him/her?

How have readers responded to Doomwalker? 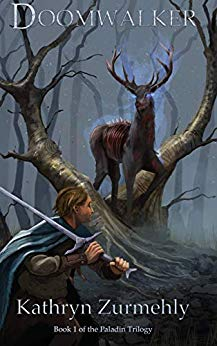 Paladin Valen has hunted the broken remnants of the dead elven gods all his life. Now he is tasked with delivering a warning from his goddess. Called ‘Doomwalker’ for reasons he does not understand, Valen makes his way toward the great capital city of Crownshold with a sense of duty and foreboding.

He crosses paths with the elf Maryx, a spy for the doomed kingdom of the elves.
She is bound to him through childhood oaths that connect her to the terrible destiny of the ‘Doomwalker’.

War is coming to the land and it is hard on their heels. Accursed warriors stalk the woods and an army moves towards the city with no sign of their passing but burning villages. Valen and Maryx’s fate looms over them, though just what that fate will be, neither can tell.