Author of NewsBiscuit: 15 Years Of Typos


Launched 2006 by John O’Farrell, with the noble aims of eradicating global poverty, creating a lasting peace in the Middle East and providing a daily dose of humour to bored people at work. Since then, after many cups of tea and plenty of biscuits, we are confident that George. W. Bush would agree – ‘Mission Accomplished’.

Who or what is NewsBiscuit?

Are there any topics you won't cover?

What's the format of your stories?

Who is this book aimed at? Do you have a particular demographic? 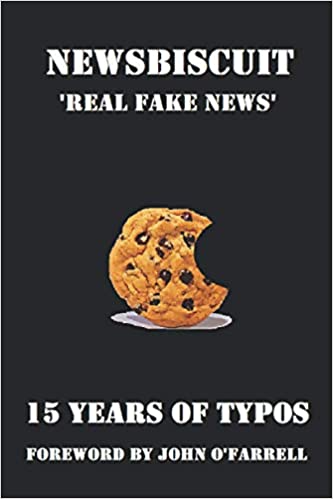 Posted In: Humour
Buy this book

Looking for a Xmas stocking-filler? Or a good book to take to the loo? Why not buy ’NewsBiscuit: 15 Years of Typos’. This humble collection of stories is the culmination of years of frantic scribbling and three minutes of careful editing.

‘Five stars? I thought I was reviewing a toaster’ – Amazon Reviewer

‘Although NewsBiscuit remains proud to have been Britain’s first daily news satire website, I am forced to admit that in the years that followed, others may have come along. Yeah, those bastards totally copied my idea of copying The Onion.’ John O’Farrell

All profits from the book go directly to charity. We are delighted to support ‘Arts Emergency’ the award-winning mentoring charity and support network (https://www.arts-emergency.org/) helping young people get a fair start in arts and humanities. And ‘English Pen’ – one of the world’s oldest human rights organisations, championing the freedom to write and read around the word (https://www.englishpen.org/)

Hundreds of writers have contributed to the making of this irreverent book – which Mr. O’Farrell’s lawyers were keen to make very clear.