ANTHONY MCNALLY is a former British soldier that saw active service in Northern Ireland and the 1982 Falklands War where he was credited with the shooting down of two enemy aircraft with SAM missiles. After being diagnosed with PTSD (Post Traumatic Stress Disorder) he began writing about his experiences which led to his successful writing career and his books ‘Still Watching Men Burn’ and his trauma poetry and World War One book ‘Screaming in Silence.’ Anthony is internationally recognised for his tireless campaigning for better treatment and understanding of veterans with mental health problems he is highly sought after by press and media around the world to give his views on the subject. Living in the tranquil English Lake district with his wife Linda and his two Labrador dogs, Anthony continues to write his best selling books, now being read by the SAS (Special Air Service) Sons of Eirinn Operation Celtic Jihad (Book 1 ) and Z Troop The Marrakech Gamble (Book 2), Book 3 coming soon in the Conner Ryan Series. Please visit the author’s website to see his other work. www.tonymcnally.co.uk 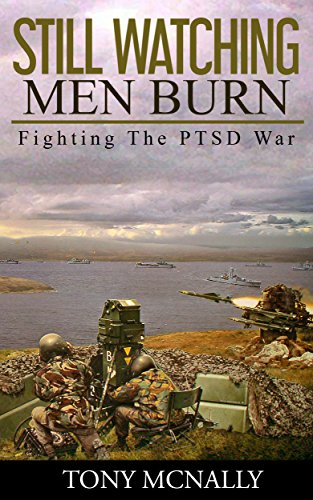 British soldier Tony McNally had a vital job in the Falklands - as a Rapier missile operator, his job was to protect the British ships and men from air attack by the fearless and desperate Argentinian pilots. His war went well when he shot down two Argentine jets - until June 8, 1982 when McNally and his Rapier system were dug in on the hillside overlooking Port Pleasant near Fitzroy, wrongly referred to as ‘Bluff Cove’, providing Air Defence cover for the RFA Sir Galahad and Sir Tristram LSL’s , as they sat waiting to off-load hundreds of soldiers. Suddenly,Argentine A4 Skyhawks screamed into the bay loaded with 500Ib bombs... and McNally's system failed. He and his detachment watched, helpless, as bombs rained down on the defenceless ships. Fifty men of the Welsh Guards lost their lives and many others - famously including Simon Weston - were horribly burned. McNally's life changed in that moment. He left the army after the war and - though he re-enlisted and even volunteered for Northern Ireland - he was riddled by guilt and plagued by nightmares and flashbacks of that awful day. ‘Still Watching Men Burn’ is updated from ‘Watching Men Burn’ and covers his journey back to the Falklands Islands Pilgrimage in 2007 and his ongoing personal battle with mental health up to 2016.