How would you describe Bad Weather Bad Man to a new reader?

To what extent is Bad Weather Bad Man based on your own experiences?

Bad Weather Bad Man is good discussion of rural homelessness. Why did you chose this topic?

The murders are pretty tame in your book. Why?

Is there romance also in the book?

Bad Weather Bad Man is exciting in parts, more mellow in others. Why did you write it that way?

Does Ace get away with it?

Isn't the ending a bit contrived? 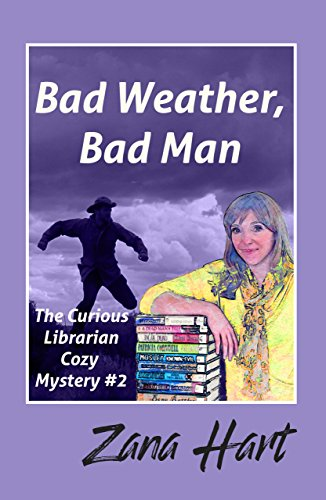 Lauren Long, library director in the charming town of Silvermine, Colorado, welcomes homeless people to use the library. One is Billy, who sends email from the library’s computers and warns Lauren about a bad man. When Billy is found dead in the forest, murder is suspected.

Billy’s cousin Barb comes to town and puts on a wild party to celebrate his life. At the party, Lauren meets Ace, a radical and brilliant homeless man.

Despite being warned, Lauren soon agrees to a request from Ace which could cost her dearly. She came to Silvermine because of her yearning for a sense of community, but it seems that she may have misjudged some people, including her boyfriend Justin. And nobody but Lauren seems to care who committed the killing.

When something completely unexpected happens on her thirtieth birthday, Lauren must deal with panic. When she learns an important secret, things begin to make sense. Eventually Barb reappears with astonishing news, and a future better than anyone imagined begins to unfold.