My name is J.B. Wadsworth, and I write historical romances set in the Gilded Age. I've always been fascinated with this era--the culture, the architecture, the pomp, the inequality, you name it. This era is so rich in eccentric historical figures and events that I'll probably stay here for quite a while. I have written two books in "A Gilded Age Romance" series, which are clean historical romances set in New England. "Pearls & Steel" was a runner-up in the New England Book Festival 2021 in the Young Adult category. It was also named as a finalist in the American Fiction Awards 2021 in the Romance: Historical category. "Ninety-Nine White Horses" was named a winner in the New England Book Festival 2021 in the Regional category. I'm a fan of all things Jane Austen, whether it is one of her books, podcasts about her, or movies of her stories. L.M. Montgomery is also one of my favorites. I love traveling, researching for my stories, and concocting a blend of history and fiction to produce the finished novel. My favorite part of the research process is spending hours rummaging through nineteenth-century newspapers in the special collections room in the local library and finding some hidden gems to make my characters come alive.

How would you describe Pearls & Steel to a new reader?

What was the inspiration behind Pearls & Steel ?

Which character in Pearls & Steel has had the greatest impact on readers?

Who is your favorite character in Pearls & Steel?

What are the themes in Pearls & Steel? 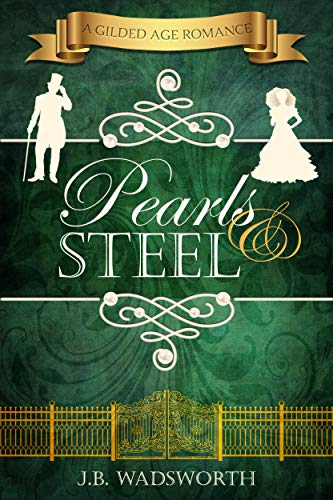 Posted In: Romance
Buy this book

Is love really worth any price? After being driven from his home in Vermont by a mother perched on the edge of insanity and a money-grubbing old woman who won’t let him marry the woman he loves, Sheridan Baird seeks his fortune in the steel mills in Pittsburgh. But when his worst fears come true and his love marries another, he wonders if it wouldn’t have been better to have perished in the Civil War like his brothers. Then, he meets the attractive and sophisticated Elinor Taylor from Manhattan. Encouraged by the death wish of a good friend and in a reckless bid to seize control of his fortunes, Sheridan moves to Brooklyn, New York, to try to win her heart. Things rarely go according to plan, and he ends up fighting, not only for Elinor’s love but also for his very life. Elinor Taylor, the daughter of a wealthy financier from Manhattan, chafes under the constraints of upper-class society. When her parents take it upon themselves to find her a husband from among the snobby, self-important New York elite, she rebels by providing her own bachelor to court. Things veer off course when he falls in love with her, and Elinor and her parents spend Christmas in Pittsburgh, where she meets Sheridan Baird, a steelworker from Vermont. Now, she must determine if she should settle for a safe marriage to a good man from a Knickerbocker family or chase her dream of marrying a man she can both love and respect.