Author of Suppose We

Geoff, could you take us through your writing process?

Do you often find yourself interrupted by butterflies? Is it helpful?

Why do you think science fiction has such broad appeal? (I suppose we could ask the same question of any popular genre – crime, romance etc – and your work spans a few genres, but always with sci fi at its core)

The Muppet Show gave us Pigs In Space. We’ve had to wait 40 years for Vegans In Space. Could you tell us a little about the role of veganism in the story?

Which writers provided inspiration for Suppose We? Or for your writing in general?

Which of your books or stories are you most fond of?

What are you working on now? 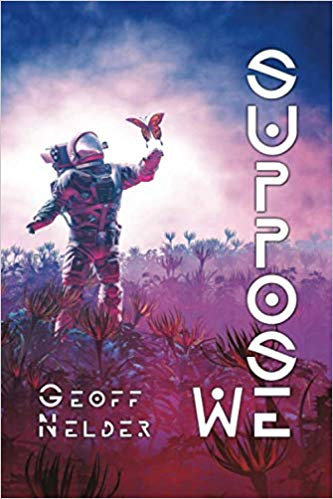 When a ship crash-lands on a faraway planet the crew needs local help. Unfortunately, the natives are a million years ahead of us. Ignored, the crew has to find a way to get attention. Bringing back a sense of discovery and wonder to science fiction.

“I’ve always found Geoff’s work both inspirational and brilliant. I know that whenever I pick up one of his works I’m in for a damned good read. For those who’ve never read any of his works before, welcome to the Geoff Nelder club.”—Mark Iles, author of THE DARKENING STARS series.