Author of State of Anger


Thomas is a full-time writer and former airline pilot and Director of Flight Operations for a private corporation.
He is best known for the Virgil Jones series: State of Anger, State of Betrayal, State of Control, State of Deception, State of Exile and the latest, State of Freedom
Thomas lives in northern Indiana with his lovely wife, Debra, his children, and his trusty sidekicks and writing buddies, Lucy, the cat, and Buster the dog.

Thomas, could you take us through your writing process/routine? Many of our readers are also writers themselves, and it's always interesting to see how writers manage their time, the sequence they go through in creating a new work of fiction -- the nuts and bolts of writing a suspense thriller

Some online reviewers have been offended by profanity in your novels. What's your philosophy when it comes to writing dialogue? Do you see a difference between the USA and the UK, for example, in this regard?

You like to blend together a couple of sub-plots to make a more complex whole. How do you keep track of all the moving parts?

In a nutshell: what's the storyline?

Where does Virgil come from? Does he reflect some aspect of you, or people you grew up with? He's an uncompromising individual...

If you had to pick an actor to play Virgil, who would it be?

State of Anger is the first in a - now - well-established series. How does it feel, growing your characters over such a long timeline? How has Virgil's character evolved over the series? And when will you give Virgil an easy day at the office?

What are you working on at the moment? What's next?

Where do you see the series ending? 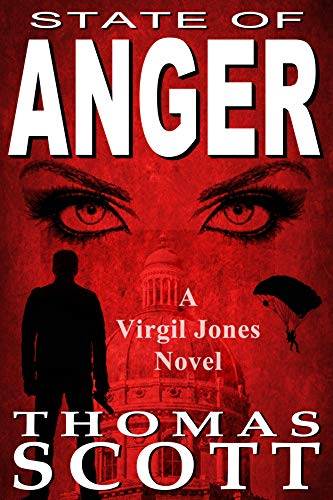 Detective Virgil Jones, leader of the Major Crimes Unit tackles the hard cases. 'The good stuff' his boss likes to call it. Except there's nothing good about his latest case. Nothing at all. A team of serial snipers are on the loose...their civilian victims chosen at random. Or are they?

With no witnesses and very little evidence, the Major Crimes Unit is ordered to find and stop the killers by any means necessary. Except when Virgil's long-lost adopted brother, a convicted felon named Murton Wheeler comes back to town, in trouble and on the run, Virgil knows it's more than just coincidence. He can't prove it...in fact, he's not even sure he wants to.

As the bodies continue to mount, Virgil finds himself running out of options, knowing he has to choose where his true loyalties lie...with the people he's sworn to protect, or to the brother that left him behind when he needed him the most.

But in the end Virgil discovers he never really had a choice, because the final bullet reveals a truth that will change his life forever.

"This is Crime fiction at its finest…a Thriller filled with mystery, suspense, humor and a touch of romance as well!"