What inspired The Ravencrest Saga, especially The Ghosts of Ravencrest?

What can you tell us about Belinda Moorland, your central character?

Tell us about Ravencrest Manor and its location.

Is there erotica in The Ghosts of Ravencrest?

How do you divide up the characters? Does Alistair do the men and Tamara, the women?

How do you divide up the work in general?

How many books will there be in The Ravencrest Saga? 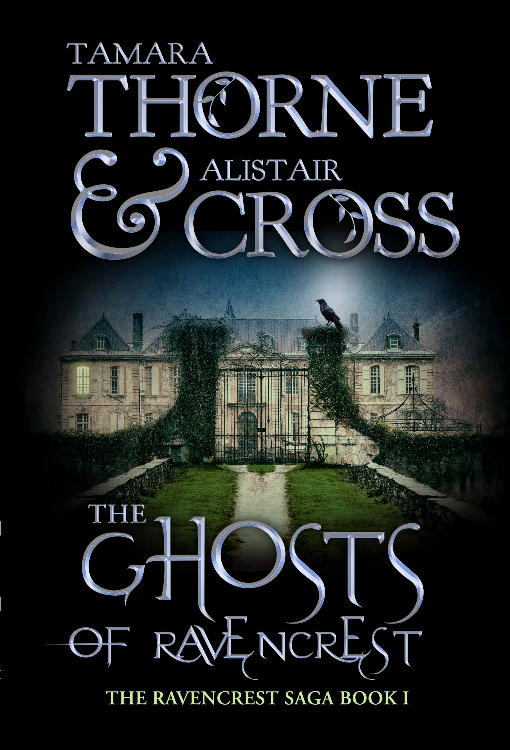 Darkness Never Dies ...
Ravencrest Manor has always been part of the family. The ancestral home of the Mannings, Ravencrest’s walls have been witness to generations of unimaginable scandal, horror, and depravity. Imported stone by stone from England to California in the early 1800s, the manor now houses widower Eric Manning, his children, and his staff. Ravencrest stands alone, holding its memories and ghosts close to its dark heart, casting long, black shadows across its grand lawns, through the surrounding forests, and over the picturesque town of Devilswood, below.

Dare to Cross the Threshold ...
Ravencrest Manor is the most beautiful thing new governess, Belinda Moorland, has ever seen, but as she learns more about its tangled past of romance and terror, she realizes that beauty has a dark side. Ravencrest is built on secrets, and its inhabitants seem to be keeping plenty of their own - from the handsome English butler, Grant Phister, to the power-mad administrator, Mrs. Heller, to Eric Manning himself, who watches her with dark, fathomless eyes. But Belinda soon realizes that the living who dwell in Ravencrest have nothing on the other inhabitants -- the ones who walk the darkened halls by night … the ones who enter her dreams … the ones who are watching … and waiting …

Welcome to Ravencrest ...
Who is the man digging in the garden beyond Belinda’s bedroom window? Who -- or what -- is watching her from the vents? From ghostly screams and the clutching bony fingers of death in the indoor pool, to the trio of nuns in the east wing who glide toward Belinda with black blazing eyes, to the beckoning little girl in the red dress who died more than two centuries ago, Belinda is thrust into a world of waking nightmares where there is no distinction between the living and the dead, and there are no limits to the horrors that await. Witchcraft is afoot at Ravencrest and as unspeakable terrors begin to unfold, Belinda realizes that her beautiful new home is a keeper of tragedy, a collector of souls. And it wants to add her to its collection