What is Hotel California about?

Is it based on the Eagles song of the same title?

So, is Hotel California a thriller?

What was the most difficult part of the plot in Hotel California?

Is Hotel California only available in paperback?

Are you running any promotions on Hotel California now?

If Hotel California were to be adapted for TV or film, who would you see in the lead role? Who did you have in your mind’s eye when you wrote him/her? 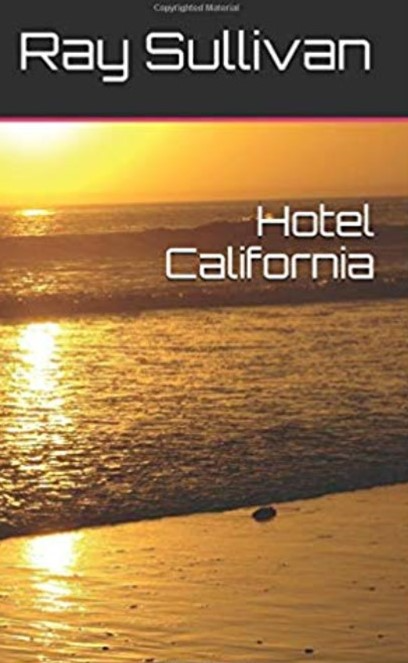 For celebrities, death is only the beginning of the end.

Imagine you are a rock star, a very famous rock star, very rich, very popular and very tired/bored/fed up/ and being chased by the IRS/ex-wives/old band members. What do you do?

Touring to pay the back tax isn’t going to work – more money just to pay the taxman, the ex can find you from your tour schedule and you’ll probably need to enlist the assistance of the old band members to hold the tour anyway. They’ll probably want paying for the last tour as well as the new one and worse, they’ll probably expect to use the same hotel.

Ignoring the situation doesn’t work either. Taxmen just don’t go away; nor do ex-wives. Old band members might forget about you, depending on whether they’re in-between rehab or not.

Just disappearing seems attractive, but not only will the taxman, your ex-wives and former band mates keep on looking to find you, so will your fans, the biggest pain-in-the-ass group ever to make a talentless singer rich and famous, who seem to believe collectively that they deserve to poke into each and every facet of your miserable life. And then there’s bloody Hello magazine….

Suicide might seem like a good idea, tax is someone else’s problem, the ex can go to hell – you can meet up later. But it’s so very final. If only there was a way to disappear, appear to die but actually keep on living. That’s when you need to get your manager to arrange a meeting with Tony Morroney, General Manager of Hotel California, located on a mysterious South Sea island, populated with the allegedly dead but rich and famous – rock stars, film stars, dictators who got out before the Russians got to the bunker, that kind of elite. As long as you’ve got the money, future earnings and can commit to never leaving the island, never contacting your family and loved ones and agree to be buried on the island in an unmarked shallow grave when you finally shrug your mortal coil, then Hotel California may be for you.

Don’t get worked up over the grave, you should have a fabulous one your fans flock to in pilgrimage all year round. You get a great send-off while you’re alive and your royalties rocket (ex-dictators may have to sell off stolen artwork to stay solvent, because Hotel California is very much a one-way journey; run out of cash and that shallow grave is your only destination).

The hotel has been there a long time and Tony is just the latest in a long line of very discreet and ultimately ruthless managers of the hotel that you can check out of anytime you like, but you never can leave.

When 1980s Punk Rock star Ricky Maggott dies suddenly of a complication during a routine operation his fan base is bereft, none more so than Pulitzer Prize winning music journalist Aiden McKie. Like most fans who have followed Ricky since his punk rock entry in 1985 until his untimely death, Aiden swallowed the whole story about the autopsy, the burial and the highly tax efficient release of a box set of all of Ricky’s recordings within hours of his death.

Then he started to see issues with the facts and took his grieving head off and put his journalist head on. He started asking the right questions of the wrong people, found himself being targeted by a ruthless assassin and has to flee. But to where? Well, in his investigation he finds out about Hotel California and makes his way there. Once there he finds that the residents are not all happy about the arrangements and while he can cope with all the sex, drugs and Rock n’ Roll Hotel California throws at him, it’s the killing he can do without.