Author of All That Lingers


I was born in liberated Rome to a half-Jewish Viennese mother who had found a modicum of safety in Italy after the Nazi annexation of Austria. My early childhood was spent changing countries and languages until we arrived in New York. There, from age seven, I lived in a Manhattan neighborhood of Holocaust survivors and fellow Europeans displaced by war. I absorbed their memories of betrayals and sacrifice, of courage and difficult decisions, of strangers’ kindnesses and sheer luck. I came to understand that their gratitude for having found safety in America was tinged with longing for the lives they’d once loved and had been forced to give up. I learned that the past is never quite past. These lingering shadows of all that had been lost are what inspired me to write ALL THAT LINGERS — yet, in writing the novel I found myself reflecting on what my family’s life might have been like had they not been able to leave Vienna.

How would you describe All That Lingers to a new reader?

What was the inspiration behindAll That Lingers ?

Which character in All That Lingers has had the greatest impact on readers?

If All That Lingers were to be adapted for TV or film, who would you see in the lead role? Who did you have in your mind’s eye when you wrote him/her?

How have readers responded to All That Lingers 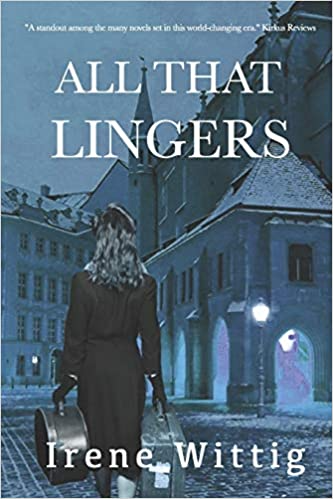 The rise of Nazism catapults Emma’s once idyllic life in Vienna into chaos. As she grapples with the harsh new reality of her country’s betrayal, she desperately clings to her humanity by hiding her Jewish friends. In the aftermath, she finds solace in helping those in even greater need than herself.
The war sends Sophie, an innocent young girl, down unexpected paths. When she returns to Vienna from her American refuge, she will seek her lost history.
Friedrich, Sophie’s uncle, teeters on the edge of what is right and his personal survival. His actions and inaction leave long-lasting repercussions that will threaten to throw all their lives into turmoil again.

Follow the interweaving stories of people through the most tumultuous period of their lives and its wake, as they endure loss, devastation, betrayal and heartache, while still clinging to hope for a better tomorrow.