Ronald J. Schulz Book is a new author who insists on writing true stories. Born in Chicago, Ronald grew up in the suburb of Wood Dale, Illinois, longing for a more meaningful life. At fifteen he ran away to New Orleans, where he lived on Skid Row until betrayed by a priest. As a disaffected seventeen-year-old high school dropout in 1969, Ronald took LSD while hitchhiking into the western American counterculture. He also became involved in radical movements in New York and Chicago, including the SDS Days of Rage. Arrested and subjected to several months in a mental hospital before he joined a Wisconsin commune, which remained his home throughout the 1970’s. In 1975 he hitchhiked from across North Africa and the Middle East, spent time on a kibbutz and working at a copper mine in Israel’s Negev desert. Then on to India and Nepal, where he spent nine months studying Buddhism under Lama Yeshe. His life has been full of adventure, travel, and different jobs, including teaching English classes in Tokyo, construction work in Los Angeles, and mining in South Dakota and Colorado. Ronald has a BA in political science from the University of Washington, as well as certificates in memoir writing and teaching English as a second language. He has been to every continent with the exception of Antarctica. Currently, he lives in Seattle, where he’s a member of Hugo House and the Seattle Writers Meetup Group.

How would you describe Chicago Rage to a new reader?

What was the inspiration behind Chicago Rage?

Which character in Chicago Rage has had the greatest impact on readers? 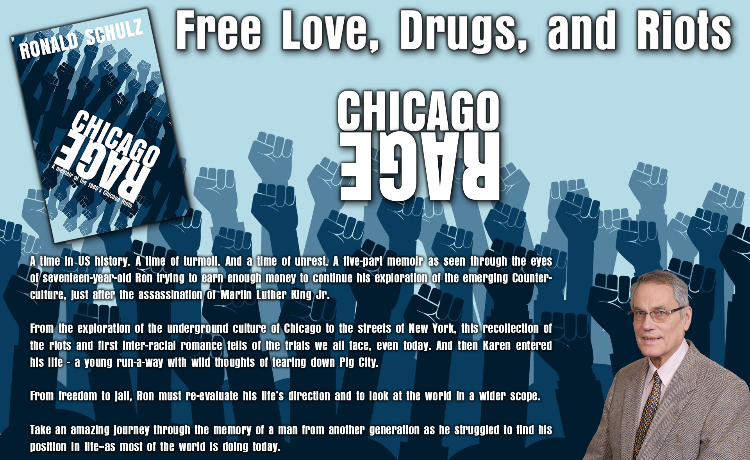 Free Love, Drugs, and Riots
A time in US history. A time of turmoil. And a time of unrest. A five-part memoir as seen through the eyes of seventeen-year-old Ron trying to earn enough money to continue his exploration of the emerging Counterculture, just after the assassination of Martin Luther King Jr.

From the exploration of the underground culture of Chicago to the streets of New York, this recollection of the riots and first inter-racial romance tells of the trials we all face, even today. And then Karen entered his life - a young run-a-way with wild thoughts of tearing down Pig City.

From freedom to jail, Ron must re-evaluate his life’s direction and look at the world in a wider scope.