NICOLAES NIMBUS by Koos Verkaik The book that had to be written… Koos Verkaik is one of the hardest working authors today; 60 different titles under his own name, with even more than 70 under a pseudonym! He a true master of the genre: Magic, Mystery and Adventure! For Outer Banks Publishing Group he has written the intriguing novels Heavenly Vision and The Nibelung Gold, plus the series of children’s books Saladin the Wonder Horse and Alex and The Wolpertinger. Outer Banks Publishing Group has just published his newest novel, the sensational, breathtaking Nicolaes Nimbus, a high tech science vs ancient magic blockbuster… From the back cover: Scientists and wealthy owners of high-tech companies have pumped millions of dollars into the search for immortality. But does the future look bright or is there disaster waiting behind the horizon of time? The world is getting more complicated by the day, but who’s actually in charge? A group of scientists in Germany have unmasked a cheating visionary. An intriguing phenomenon from the past turns up. Who is Nicolaes Nimbus? Is he an immortal man of flesh and blood from our ancient past? The hunt is on! The secret is priceless! Who is in control, the scientists or the mystic? The intriguing novel Nicolaes Nimbus embraces modern developments… and warns against ancient magic that never dies, waiting for the right time to manifest itself. A book for this day and age, a book that had to be written…

A book for this day and age, a book that had to be written… could you say a little more about this?

I assume you studied about the past and the future for this novel?

Heavy stuff – but your books are so easy to read…

Have you written about magic and science before?

So you started very early as a writer. And it is said that you have never had writer’s block…

Tell us some more about Nicolaes Nimbus.

You come up with odd, colorful characters often. It has become a Koos Verkaik trademark. Can you expand on that? 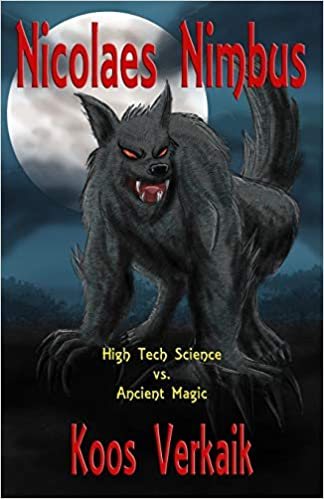 The Search for Immortality A group of extremely clever rich German and Dutch scientists hopes to live forever. They search for different possibilities to prolong life and spend lots of money to reach their goal. Then they hear about a wizard who was supposed to have lived ages ago – Nicolas Nimbus. If Nicolaes Nimbus is still alive and has found the secret of immortality through magic; the scientists want to find him – to examine him in their labs! But they need master painter Rein Vulpes to set a trap for Nicolaes Nimbus. Then high tech science meets ancient magic…