Author of The Circle The Sidhe Series #1


Cindy Cipriano lives in North Carolina with her family and their 27 pets. Not really.

Living in a small town like Woodvine, North Carolina, means everyone knows everything about everybody. The same goes for seventeen-year-old Leath Elliott who can't seem to escape her tragic past and the loss of her father. Her only break from reality is through recurring dreams where she's spent a lifetime growing up with a boy she's never met. When a stranger shows up in the form of James Turner - a mysterious boy with a dark past - Leath begins to wonder if her dreams might be coming true. Literally.

Things get complicated when Leath finds out that James' sudden appearance in her small town is anything but a coincidence. Demanding answers, Leath confronts James, but nothing could have prepared her for the truth he tells her.

Now, the future she once saw in her dreams and the boy she's falling for is fading fast and Leath must make the ultimate decision between giving up her freedom or giving up her heart.
Searching, The Fading Series Book Two - Leath is packing light: just her two lockets (one from Victor, one from James) - and of course, her pistol. She knows that when she leaves Woodvine, even her own mother may not remember her in the shifted reality that will be left behind. But she's driven by something that eclipses everything else: her recovered memories. Now that she remembers James--she won't stop searching until she finds him.

Cindy's first novel, The Circle, Book One of The Sidhe, won the 2014 Moonbeam Children's Book Silver Award for Pre-Teen Fiction - Fantasy. Other titles in the series include The Choice, Book Two of The Sidhe, and The Lost, Book Three of The Sidhe. The series follows Calum, Laurel, and Hagen from middle through high school as they first rescue Calum's kidnapped cousin, and then save the Otherworld from dark Sidhe.

How would you describe The Circle to a new reader?

To what extent is The Circle based on your own experiences?

The Circle is a good example of this genre. Who has inspired you?

The Circle is a thrilling read, a real page turner. How important was it to you to write with pace and energy?

If The Circle were to be adapted for TV or film, who would you see in the lead role? Who did you have in your mind’s eye when you wrote him/her?

How have readers responded to The Circle? 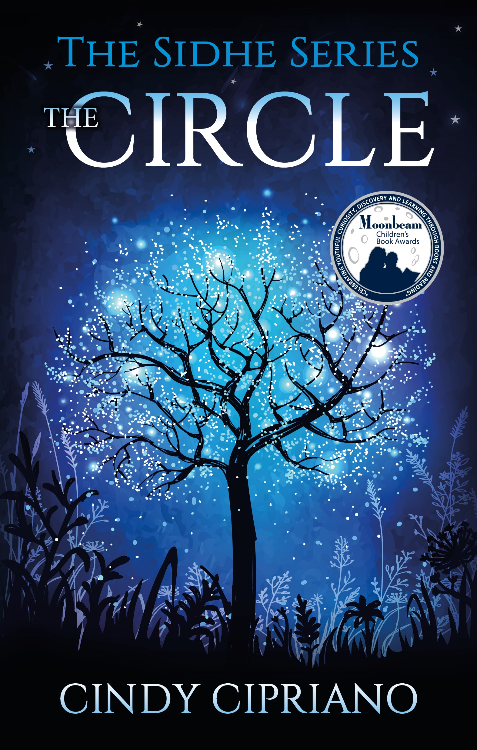 Calum Ranson is sure of three things: his cousin Finley is alive, Calum will find him, and no one knows Calum and his family are Sidhe.

That is until Laurel shows up at his mother's bookstore wearing a dark clan's mark. When Calum learns the details surrounding the disappearance of Laurel's brother, he suspects the evil Hobayeth clan. Calum and Laurel work together in the Realm of Man and the Otherworld to rescue her brother, revealing a connection between Calum and Laurel that may cost Finley his life.