Author of Rebirth Book 1 of the E.L.F. Saga


I am two years older than dirt. American born and raised, lived on both coasts and various places in the middle of America. My dream has always been to have superpowers, which never materialized so I fell back on my love for writing.
The first manuscript was written in pencil when I was about 17, maybe earlier. Many, many years later I used a typewriter to write the second manuscript which I hope to have published next year (30 years after it was first written)
Finally, I wrote the first three books in the E.L.F. Saga and published them this year.
Almost forgot the important part. My wife and I (been together for 50 years) travel the country (the rumor that she is part gypsy ... isn't true). allowing me to write in some nice places.
I hope you enjoy the stories I create and remember all my books are also on Amazon Kindle.

How would you describe Rebirth to a new reader?

To what extent is Rebirth based on your own experiences?

What unusual fact can you share with us in the writing of Rebirth.

If Rebirth were to be adapted for TV or film, who would you see in the lead role? Who did you have in your mind’s eye when you wrote him/her?

How have readers responded to Rebirth

Can you sum up your writing experience? 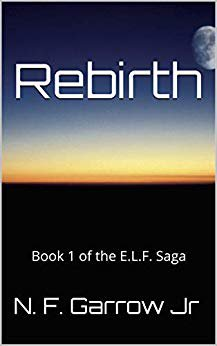 What happens when one brilliant man's belief in his destiny is acted upon? Aldrich Huysman sets in motion an experiment that will send ripples throughout the Dynasty of Man and beyond. Once unleashed, can he control it?
The Governments of Earth discover an Asteroid heading towards the planet. Destruction seems certain, but that is what they are meant to see, unaware that a greater danger lurks just out of sight.
A sixty-five-year-old truck driver stops for a couple whose car has broken down on the side of the road in the desolate Nevada Desert. Little does he realize that his good deed will change him, and everyone he comes in contact with forever.
Tom Paul is an ambitious man with power, who exists and thrives in the shadows of government. A man of control, he detests the likes of Doctor Albert Lans and his crackpot followers in E.L.F., no matter how often they are proven correct.
Jon Vega is a solider caught up in the power struggles of men, both in and out of government. Bitter and angry, he is faced with fighting his own personal demons and trying to do what is right. He is sent on a mission to retrieve a man on the alien planet; Earth.
Rebirth is the first book of the E.L.F. series that immerses you in the struggle between power, desire, and hate that reaches well beyond this world.